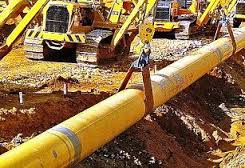 Kenya has shrugged off fears over a decision by neighbouring Uganda to consider building a crude oil pipeline through Tanzania.

Kenya brushed aside concerns that Uganda’s plan, if it proves cheaper than the alternatives, would scuttle its infrastructural plans for its own oil pipeline.

Acting Transport Cabinet Secretary James Macharia told the Nation on Wednesday that while Kenya is “keenly keeping a close watch on the unfolding events in Uganda”, it would go ahead with its own infrastructural plans “undeterred”.

“We are going according to our own plans. Nothing has changed,” said Mr Macharia in Nairobi.

Last month, it emerged that Kenya’s prospects of a crude oil pipeline through Hoima-Lokichar-Lamu could be crushed after Uganda signed an agreement with Tanzania to explore the Tanga route.

The MoU also invited other interested parties, such as Kenya, to assess and develop the Tanga route, creating a base for developing a crude export pipeline from Hoima to Tanzania’s Tanga port.

If Uganda goes ahead to construct the pipeline through Tanzania, it will deal a major blow to Kenya’s Lamu Port-South Sudan-Ethiopia Transport corridor (Lapsset) project.

“We are simply evaluating the least-cost pipeline route through the East African coast, our plans focus on ensuring our crude oil has value,” Uganda’s Ministry of Energy and Mineral Development Permanent Secretary Fred Kabagambe-Kaliisa was quoted as saying in Ugandan media.

But in Nairobi, Mr Macharia said while Kenya was keenly awaiting the decision from planned talks between President Uhuru Kenyatta and his Ugandan counterpart Yoweri Museveni on the way forward, Kenya’s plans would not be derailed.

“In the last summit which was a few weeks ago, the matter was discussed and what was decided was that the two head of states (Mr Uhuru and Mr Museveni) would hold bilateral talks and chart the way forward.

“Either way we are looking into options which will protect our national interests. There is no cause for concern,” said Mr Macharia.

During his presidential visit to Uganda in August, President Kenyatta said Kenya and Uganda had settled on the northern route for the Sh400 billion crude oil pipeline that would transport oil from Albertine to Lokichar in Turkana County.

Where are Qualified People in Oil and Natural Gas Sector?
25 replies