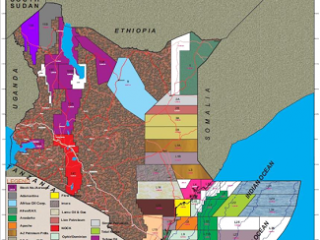 Licensing of petroleum exploration blocks, is governed by the
Petroleum (Exploration and Production) Act Chapter 308 of the Laws of
Kenya. All contracts are based on a Model Production Sharing Contract
(PSC) issued as a schedule to the Regulations issued under Section 6 of
the Act.
The signed Production Sharing Contracts have the following key component:
a) Signature Bonus: This is a one-off fee payable to
the Government by the Company upon signing of an oil exploration
contract. It depends on the area of the Block and previous data acquired
on the Block. Signature Bonus negotiation came into effect in 2009. In
block 12B for example the signature bonus paid was $300,000 according to
JV partner Australian Swala Energy. In block L27 operated by CAMAC
Energy the signature bonus paid was $310,000 according to the PSC available on this website.
A surface fee is also payable and is calculated on
the basis of the surface area of the Contract Area on the date those
payments are due. In Block L27 the amount set is $5 per square kilometre
per annum during the Initial Exploration Period, $10 per square
kilometre per annum during the first Exploration Period, $15 per square
kilometre per annum during the second Exploration Period and $100.00 per
square kilometre per annum during the Development and Production
Periods
b) Work programme and expenditure: The contractor
guarantees the agreed work programme and minimum expenditure. Initially
this was pegged at 15% bank guarantee and 85% parent company guarantee.
However, the Ministry has improved this and now the newly licensed
companies are required to provide a 50% bank guarantee and 50% parent
company guarantee.
This is to make sure that the companies proceed with their work
progamme expeditiously as agreed with the Government and that incase of
non-performance, the Government can liquidate the guarantees more
easily. For small companies (based on their annual turnover criteria),
they are required to post 100% bank guarantee. It is important to note
that upstream petroleum operations are capital intensive and the
Government entirely relies on the oil companies to invest their risk
capital in the operations.
In addition, this risk capital is raised through equity. This is
contrary to investment in mid stream and downstream petroleum segments
which can be funded by debt
c) Cost oil: This is usually the negotiated
percentage of total crude produced for recouping of investment costs
incurred by the contractor in exploration and production of oil in a
given field. It is normally up to 60% of all the oil produced in a field
for about five years.
d) Profit oil: This is the remaining oil after
deducting cost oil and is shared between the Government and the
contractor. For example, when a field is small the Government take is
50%. As the production increases, the Government take can increase up to
78% of the total profit oil.
e) Windfall profit: Where oil prices are higher than
the negotiated threshold, the Government creams off contractors take
above the threshold crude oil prices by 26%.
f) Exploration phases – there are three exploration
phases of two years each, the initial period, first additional period
and second additional period. For ultra deep offshore blocks, the
initial period is extended to three years due to extra logistical
challenges in the deep water acreage.
g) Relinquishment – is 25% of the area of the block for each period
The PSC also has the license rental fee and training fee included. In
Block 12B for example the license rental fee is set at $40,000 during
the first year (2012-2013) and $80,000 during the second year, training
fee is $100,000 per annum. During the first production phase the
training fee is set at a minimum of $200,000 in Block 1 PSC with Lion
Petroleum.
Check out PSC’s for the various East African countries namely Kenya, Uganda, Tanzania, Mozambique available on our website.
Additional Source: Ministry of Energy & Petroleum Website
Comment

List Of Oil and Gas Exploration and Production Companies In Tanzania

Kenya Eyes Oil Export In 2017 via Truck and Railway

CAG TO AUDIT OIL AND GAS COMPANIES
Scroll to top