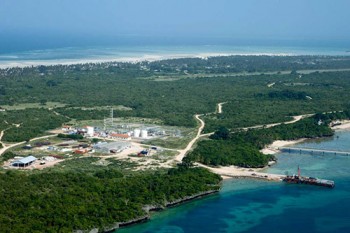 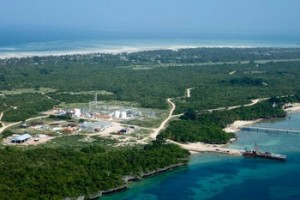 The tedious work of drilling new offshore natural gas well at the Songosongo Island’s gas field operated by the PanAfrican Energy Tanzania (PAET) Limited, comes to an end by the beginning of next week, the operators   confirmed.

PAET’s managing director David K. Roberts made the revelations before the permanent secretary of the Ministry of Energy and Minerals, Justine Ntaliwa, who made official visit of the gigantic gas project site on the Southern Tanzanian coast last week.
Roberts who was accompanied by the firm’s operations engineer Onestus Mujemula said the work on the new well named as SS12 and related workovers for three other wells is about to conclude the offshore phase of its development programme for the Songosongo gas field.
He said the new offshore well is an addition to three others which are operating to sum up to eight in total when included with four other onshore wells located inside the precious island.
He said the new well will have the capacity of producing 35 million cubic feet of gas on daily basis to supplement others that are producing a total of 94 million cubic feet on daily basis for domestic consumers.
Robert says the gas supply  to consumers per day does not match with the  entire   capacity of the wells’ capacity that can hit in excess of 170 million cubic feet.The production is impeded by the market’s prevailing demand. So far, only 94 million cubic feet of natural gas are pumped by the PAET into the national grid connected by a pipeline from Songosongo to Dar es Salaam, to cater for power generation of TANESCO turbines and other industrial consumers.
Tanzania Petroleum Development Corporation (TPDC) is doing the marketing of the gas and other related operations to boost supply.
Also present during the latest revelations made at the sight on the tiny but priceless Songosongo Island included PAET country chairman Patrick Rutabanzibwa, commercial manager   Bizimana Ntuyabaliwe, corporate affairs officer Jacqueline Kawishe,  Andrew Kashangaki, the corporate social responsibility  manager, members of the media, TPDC officials and other ministerial officials who accompanied the permanent secretary.
The operations engineer Mujemula said the construction of the new well would ease operations particularly when other wells will be scheduled for workovers and ad hoc services, one required.
Besides the drilling of the new offshore well, PAET has also been involved in workovers of the three other wells as move towards efficient gas production.  The wells named SS-5, SS-9 and SS-7 were suspended without halting steady flow of gas for the biggest consumer of the product, TANESCO and other industrial users.
The workovers and completion of the new well by next week would ensure PAET’s pivotal role in steady production and supply of the gas.
The ministry’s permanent secretary Ntaliwa hailed PAET operational team for the latest success that has ensured consumers an availability of gas to meet their demands. He said as Tanzania gears up to meet demand of power supply which is in excess of 1,000 MEGA watts, the gas production at Songosongo will keep investors enjoy peace of mind in terms of fuel availability to run turbines as well as the projected industrial revolution.
For the past 20 years, PanAfrican Energy has played a critical role in Tanzania’s ongoing shift from costly imported fuel oil to clean domestic natural gas, as well as an important role in the development of Tanzania’s industry.  Apart from producing natural gas from the Songosongo field, which is sold by the Tanzania Petroleum Development Corporation (“TPDC”) to Songas Limited (referred to as “Protected Gas”), PanAfrican Energy develops, produces and processes “Additional Gas” and has it transported through the Songas pipeline to Dar es Salaam. The net revenues from the sale of additional gas are shared between PanAfrican Energy and TPDC under a gas Production Sharing Agreement.
In 2014, PAET marked the 10th anniversary of the commencement of Songosongo gas production.  As Tanzania’s largest producer of natural gas at present, PAET supplies the gas that generates over 35% of the electricity provided by the national grid and fuels some 38 industrial business units in Dar es Salaam.
Source
Comment 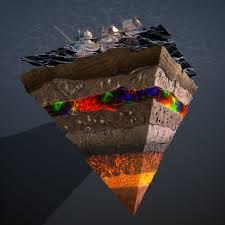 List Of Oil and Gas Exploration and Production Companies In Tanzania

Revealed: Now Everyone Can Invest in Tanzanian Gas Sector
Scroll to top