UK independent Aminex said March 8 that its Ntorya-2 appraisal well in southern Tanzania has “exceeded expectations” flowing dry high quality gas at average stable rate of 17mn ft3/d (2,833 barrels of oil equivalent per day). But its share price, and that of its partner, have fallen in early trading.

Aminex CEO Jay Bhattacherjee said: “Due to a large gas influx in the reservoir section, the Ntorya-2 test clearly supports our belief that there is a considerable gas basin to be exploited in our Ruvuma onshore acreage which we are looking forward to developing.” The well, on Mtwara licence, part of the Ruvuma production sharing agreement, is being suspended for future production. Aminex is operator with 75%, alongside UK firm Solo Oil (25%).

A month ago Aminex said the well had encountered a gross gas-bearing reservoir unit of some 51 metres with traces of oil. It now said pressure is much higher than expected. Aminex said it is updating its basin model to determine the optimal drilling depths for Ntorya-3 and for future development wells. 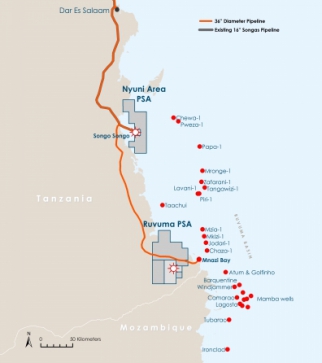 The Aminex-led Ruvuma PSA onshore Tanzania is near the border with northern Mozambique (Map credit: Aminex)

Despite the upbeat news, Aminex and Solo Oil’s share prices were 15-20% down on the day, with some investors arguing that Ntorya could have been in production by now. Bhattacherjee told NGW in mid-2016 he hoped that Ruvuma potentially might produce 100mn ft3/d by 2018-19. Aminex produced first gas from the Kiliwani North field further north on the Tanzanian coast in April 2016 but payments for some of its gas there were delayed.