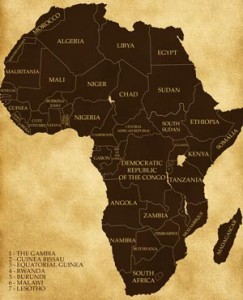 “Our research shows that intrusion into natural World Heritage Sites is especially high in Africa, where 61% of these precious areas are subject to some form of extractive concession or activity,” WWF said in a report.

“We are going to the ends of the earth in pursuit of more resources,” said David Nussbaum, chief executive of WWF in Britain, adding that minerals, oil and gas “are becoming more difficult and more expensive to extract.”

The report urges investors to help safeguard natural sites by ensuring “responsible conduct” by the companies in which they invest.

WWF’s findings flagged Tanzania’s 50 000km2Selous game reserve, a World Heritage Site since 1982 that “covers an area larger than Denmark and is one of the few remaining examples in Africa of a relatively uninhabited and undisturbed natural area.”

But legislation passed in 2009 allowed licensing of mineral extraction inside Tanzania’s game reserves.

Since then, five active mines, more than 50 mining concessions and six oil and gas concessions have sprung up that “could potentially impact the Selous game reserve,” according to the report.

“The reserve was added to the World Heritage danger list in 2014 in part due to concerns regarding extractive activities within the reserve,” it said.