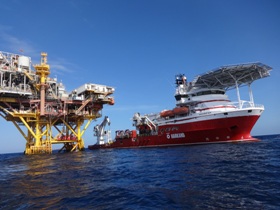 Rivalry between Tanzania and Mozambique has sparked renewed activity in the Liquified Natural Gas (LNG) segment despite the slump in energy projects in other parts of the world.

The phenomenal drop in global oil prices has no doubt brought massive headwind for much of the energy value chain, especially exploration and production companies.

Exploration and development of reserves has fallen sharply in most parts of the world as investors stayed cautious—stirred by the fact that oil prices have fallen almost 75 percent since mid-2014 as producers pump up to two million barrels of crude every day and far in excess of demand.

In East Africa however a budding rivalry between Tanzania and Mozambique, that have both discovered major gas reserves, has sparked renewed activity in the Liquified Natural Gas (LNG) segment despite the slump in energy projects in other parts of the world.

The two countries are in a vicious race to become Africa’s newest LNG exporter and snap up contracts before supplies from rival producers in other parts of the world come to market. Both nations have a targeted of exporting gas by early 2020s.

In a move that signaled a push to expedite LNG development and exports, Tanzania on January 29 announced it had finalised a land acquisition for the site of a planned LNG plant and was now working to compensate and resettle villagers.

Oil firms have for a long time been unable to gain access to the site, dealing a blow to the country’s dream of pumping gas to the market.

“After securing the title deed, the law requires the owner to pay compensation to the relevant parties based on a valuation done by the chief government valuer,” the state-run Tanzania Petroleum Development Corporation (TPDC) said in a statement.

About 55 trillion cubic feet (tcf) of natural gas has so far been discovered in Tanzania in recent years and more is expected as exploration activities continue.

Following the deal by Tanzania, TPDC now owns title deed for some 2,071.705 hectares of land that have been set aside for the construction of the planned two-train LNG terminal at Likong’o village in the southern Tanzanian town of Lindi, which is located close to large offshore gas finds.

The action by Tanzania came in the wake of resolutions by Mozambique and contracted firms, Anadarko and Eni, to get the natural gas projects online within the shortest time possible.

“What is critical is that we need to speed up the pace to the market because the window of opportunity might shrink,” Omar Mitha, chairman of the State owned ENH, that has a stake of at least 10 per cent in all Mozambique’s gas projects, told the Financial Times in November.

“The reason behind that is because the dynamics of the marketplace are changing” he added.

US energy company Anadarko separately said it was pushing ahead with its planned $20 billion Mozambique gas export project and will make a final investment decision once the government approves its development plan.

“”We’re working full out to achieve a final investment decision as soon as possible,” Anadarko’s country manager John Peffer told Reuters in Maputo, without committing to a timeline.

Anadarko aims to have its first LNG cargo leave Mozambique by the end of the decade, delayed from an original plan of 2018.

In the five years to 2015, Anadarko Petroleum of the US and Italy’s Eni have made gas discoveries in the Rovuma Basin in the Indian Ocean that are estimated collectively to exceed 160 tn cu ft.

Both Tanzania and Mozambique are keen on tapping wealth from LNG resources to support their economies soonest possible amid tightening economic conditions.

Only recently the International Monetary Fund (IMF) approved Mozambique’s request for a $282.9 million to augment reserves and maintain macroeconomic. The loan SCF aims to alleviate the external balance of payments shocks, and through strengthening macroeconomic stability, to achieve the government’s goals on poverty reduction and inclusive.

Tanzania is also banking on its gas reserves to help build its forex reserves through exports. East Africa’s second largest economy also hopes to save about $1billion a year in oil imports for electricity generation when it shifts to gas-fired power plants.

Tanzania in October 2015 launched a $1.33 billion project that aims to construct a 532 km natural gas pipeline to its capital Dar es Salaam from Mtwara where its gas fields are located. The project will also entail construction of gas processing plants.

Tanzania has indicated it will give priority to domestic use of its natural gas resources over exports under energy policy that will guide the exploitation of its vast reserves.