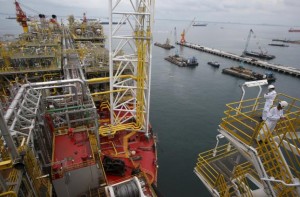 What have been your impressions of the Ugandan economy, so far?

Uganda has an economy that is growing fast. Uganda has one of the highest GDP growth rates in sub-Saharan Africa. I see a country that is progressing.

As far as oil sector is concerned, it is going to be a game changer for the country. All these things we talked about as developing the Ugandan economy have been without oil. The development of oil will then be a catalyst to take a major leap. It comes in addition to efforts made by government to develop infrastructure which is key to developing the resources. If you have the right infrastructure projects, it makes it easier to develop your resources. We’re impatient to get the oil out of the ground so that the country starts benefiting from the resource.

In your appointment, a statement issued by the company read that your task was “for preparing Total E&P Uganda’s operations in the Lake Albert basin during the transition from the exploration and appraisal phase to development phase.” How has this gone for you so far considering we are at the same stage of oil production as last year (the same period)?

We are discussing with the authorities and I think that they are committed to making sure that there is a lot of progress to reduce the time. The authorities are committed to reducing the delay and to facilitate the process. This is what I witnessed since I took my position. If that is done, the earlier we start the better. Discussions on field development plans are coming to a conclusion and we are confident that the production licences will be issued soon.

How soon is soon?

Soon I must say. You see, this business is a joint effort of the government and industry. I see an alignment in purpose. Both sides agree we must start production but there is a process. The government has to be convinced of what the industry is proposing. So, yes a lot of thoroughness has to go into this by the government to ensure that Ugandans benefit.

On our side, we are committed to continuing to work with the government to conclude the process. We all want to see this project start as soon as possible.

It is also important to recall we have had a major milestone in fiscal matters in July 2015 when the government granted the exemption of the VAT. This is a clear signal towards promoting the industry to invest.

Also, progress is being made on the studies concerning the route of the pipeline. All these steps are important to start the development phase.

In parallel, the government is also making efforts on infrastructure development to provide access to the Lake Albert area, which is also very important for the project.

Considering that you are managing a transition – appraisal to development -, what is your take on the waiting period for oil production licences?

The government is currently reviewing these applications. It is an interactive process which requires attention to detail considering the magnitude of the project, as well as constant communication with the Ministry of Energy to ensure that all inquiries pertaining to the Field Development Plans (FDPs) are addressed before production licences are awarded. Progress has been made and we are confident that the FDPs will be approved and production licences awarded soon.

Are you comfortable with the time it is taking for you get production licences?

In fairness, this is a process that is interactive in nature. We submitted a field development plan. The government will review it and ask questions. They will then get back to us and we’ll answer the questions. There will be a back and forth, and that is a normal process. At the end of the day, we submitted the addendum at the end of last year and they are going through it. There has to be clarity between what we put in the documents and the good understanding of the government.

Current global oil prices have meant companies have to adjust accordingly to cut costs. Uganda remains an integral part of Total’s operations and the insistence has been you are going nowhere at the moment. There is limited optimism globally around oil considering the low crude oil prices. In Uganda, this is coupled with limited activity but what keeps you going despite the fall in global oil prices and limited or no activity in the oil fields in Uganda?

As stated by our chairman and group CEO when he visited, to develop the resources in Uganda is the low-cost development. By development, I mean bringing the oil to the surface. Total remains committed to work towards producing the Ugandan oil resources as soon as possible because Uganda oil resources are potentially low-cost resources which will be competitive in the market.

Why is it competitive?

It is the cost of development. At the end of the day, it comes down to how much it costs you to produce a barrel. When you consider the resources used to produce oil in Uganda and compare to places that need deep off-shore facilities, it is not the same price. That is why it would still be competitive.

Total has been in Uganda for 60 years and is willing to developing its presence along the value chain in Uganda and be the partner of choice in the oil and gas sector.