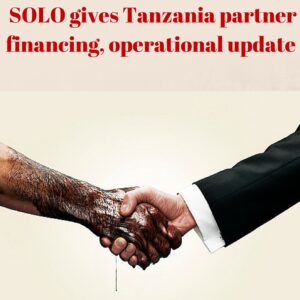 Solo today notes the news release from the Operator of Solo’s assets in Tanzania, Aminex plc (“Aminex”), which includes details of an extension to their corporate loan facility and an update relating to the Kiliwani North Gas Sales Agreement (“GSA”).

The key items relating to the GSA are reported as follows:

Ndovu has reached agreement with the Tanzanian Petroleum Development Corporation on all terms of the GSA, including acceptable payment protection mechanisms for the gas delivered. The agreement has now been forwarded to the Tanzanian Attorney General’s office, whose approval is required prior to formal signing.